Welcome to the Gene Krupa Lounge

I must, without any hesitation, mention my late father.   It was he who introduced me to Gene Krupa through his own records collected throughout WW2 and long after.   Benny Goodman’s early band, their period between 1936 – 37 was his own personal favourite and in hindsight, Dad had what I would consider to be an above average knowledge of Benny and Gene.

When my father was severely ill and was progressively going downhill, I would always take music to play when I visited.   On occasions he would slowly say “I am so sorry, but I just feel so bad, please don’t play anything as my head is just booming and I feel so sick”. 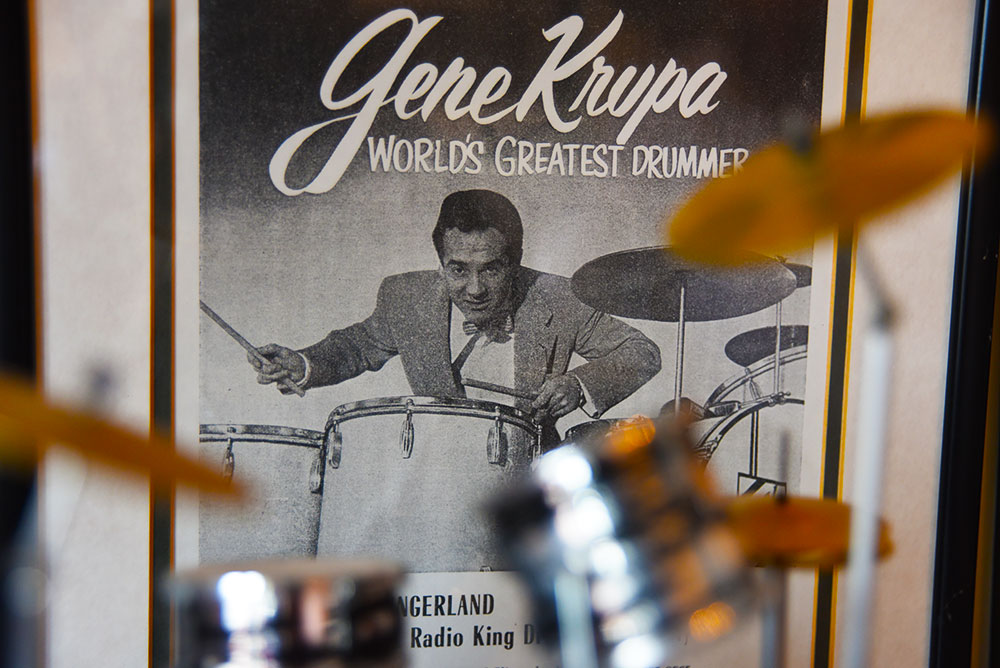 An example of an alternate take

This particular period went on for a month or so.   Then one day, I was asked to bring him something to listen to.   Having just returned from Germany, I had bought a double CD of Benny Goodman live material from 1943 – 47, hoping that there would be material from when Gene was back with Benny’s band during 1943, and there was.

I played Dad a track from September 26, 1943, the Benny Goodman quintet’s live recording of Three Little Words, after several bars of Benny’s intro, Dad’s foot was vigorously tapping the floor, after it finished, he said that was great… play it again!   I will always remember that day.

I can clearly recall, at 3 years old, being told to shush by my dear mother for playing a toy drum and can also remember records that were frequently played in the house, such as ‘Songs for Swingin’ Lovers’ (Frank Sinatra), ‘The Five Pennies’ (Louis Armstrong and Danny Kaye) and music from Glenn Miller.

Fast forward in time to around aged 8, I asked if I could play some of dad’s records – needless to say these were 78s, the bulk of which were collected by my dad during active service during WW2 while he was serving with Bomber Command flying Lancaster Bombers (80 Operational Missions).

After hearing Dorsey Shaw and Herman records a number of times, I realized that something was missing. That something was a drummer! I wanted to hear music with a fuller sound with the drums sounding through. My dad searched his record collection for a long time to find what I wanted and eventually I heard him say, “Yes, this is the one.” Gene Krupa was a fabulous drummer, a household name and a good-looking guy and upon hearing records with him drumming, I was hooked. That was it.

The background music to the video

An additional interest has been to collect rejected, alternate takes and test pressings; this tune " Disc Jockey Jump " recorded in New York January 22 in 1947 which was written by the young Gerry Mulligan is the unreleased alternate take, which has the same type format But a different drum solo.

I hope to have a collection of my alternate takes, test pressings, and rejected takes as a feature which my great friend Brooks Tegler has suggested; these will run in consecutive order so easy comparisons can be made, and with tunes like the 13th July 1942 hit, Massachusetts the released master take will be followed by two separate additional takes from the same date.

When I started seriously collecting I had to obtain necessary "works" and for example; Jazz Records 1897 - 1942 A- Lym & Lym - Z, The American Dance Band Discography 1917 - 1942 A-L & L-Z both by Brian Rust; and BG on the record BG off the record BG The record of a Legend BG Listen to his Legacy and BG Wrapping it Up all by Russ Connor have been invaluable for me to collect and track down much of my record collection, and Gene Krupa material.

These books have been in the collection for some considerable time, but it is worth mentioning that Benny Goodman a supplemental discography by David Jessup contains new material where Russ Connor left off, as well as a superb detailed inventory off all 182 Camel Caravan Broadcasts which took place between 1936 - 1939.

I purchased The Famous 1938 Carnegie Hall Jazz Concert by Jon Hancock, which is staggeringly good and for me rates with the above noted "works" for attention to detail.
Last year I had the pleasure of meeting Jon at his home and his Daughter Tilly had drawn a 8 x 12 "sketch of Gene for me (from the Manhattan Room in 1937.) Refer to the video from 2 mins 35 secs where it is prominently featured.

This photo has a special story to it.

I visited John Puddephatt who lives with his dear wife Eileen in South Yorkshire within the UK. John and I met over twenty years ago and I had no idea that he was an admirer of Gene Krupa, and he certainly was totally unaware of my interest either.

Sitting with a cup of tea and generally talking I noticed an A to Z Jazz Directory and asked if I could look at it; skipping through the pages until reaching K, I said "WOW " look at this; an original photo of Gene circa 1941, showing it to John, he said that he had originally contacted someone in the USA to get hold of it through the Slingerland Drum Company and received this in 1943 when John was engaged in active service during WW2 in Singapore while serving with the British Army aged 19 and this photo was placed in the A -Z Directory after the war where it remained until I discovered it. On hearing my interest etc John gave this to me and I had it framed.

This special photo occupies a prime position in my Office , and is situated on the right hand wall and has, and will always be there. We subsequently became good friends very quickly, and I have had many many long and interesting discussions from this great War Veteran and long time friend. 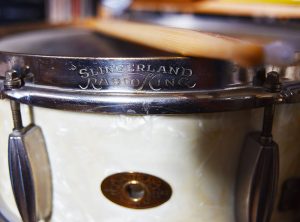 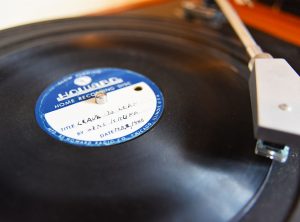 Howard Disc used by Recording Engineers, Disc Jockeys to record "live", this one with introductions by Gene, his Band playing Leave us Leap and Trio playing Limehouse Blues - Feb 2 & 3 1946 - Unpublished and undocumented 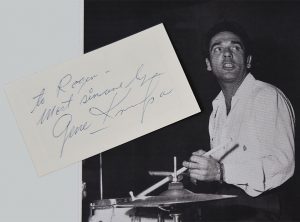 1946 Capitol Studios photo with one of many original autographs. 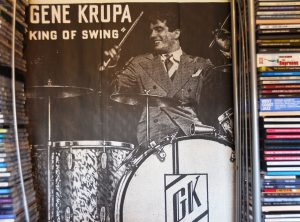 Side photo of record cabinets used to house 78's some 23,500 in collection. Photo shows bottom half of original 1940 "Krupa wins Again" advert. 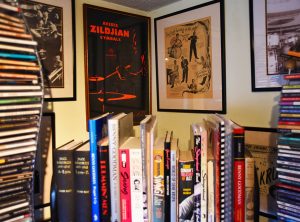 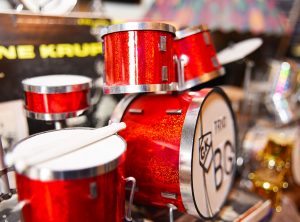 One of 12 miniature Drum Sets that I personalise, this one with GK Trio and BG front head. 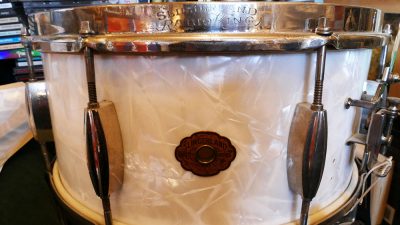 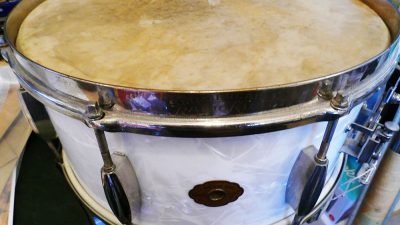 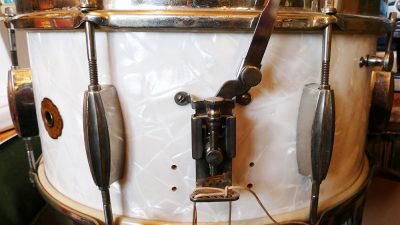 Filmed in Hollywood 2 -25th Feb 1939, and released 19 May 1939. Brushes are used for light accompaniment here and Gene is driving a full band. The ride out single brush solo is indeed very impressive demonstrating great forearm and wrist strength!

From the Film George White's Scandals filmed in Hollywood 1945

The compilation is from George White's film Scandals (1945). The stick spinning of both hands during the end of this piece looks good, try doing it!